Ever wondered if your photo ended up on a random Facebook News Feed without even knowing it? Well, starting today, you’re one step closer to finding out. The social giant wants to make sure that you know about and control the photos of you other people upload, even if they don’t tag the image. This is why Facebook launched a new facial recognition feature called Photo Review that will alert you when your face shows up in newly posted images/photos so you can tag yourself, or alternatively, ask the uploader to take the picture down, or just report it to Facebook.

Today we’re announcing new, optional tools to help people better manage their identity on Facebook using face recognition. Powered by the same technology we’ve used to suggest friends you may want to tag in photos or videos, these new features help you find photos that you’re not tagged in and help you detect when others might be attempting to use your image as their profile picture. We’re also introducing a way for people who are visually impaired to know more about who is in the photos they encounter on Facebook. Now, if you’re in a photo and are part of the audience for that post, we’ll notify you, even if you haven’t been tagged. You’re in control of your image on Facebook and can make choices such as whether to tag yourself, leave yourself untagged, or reach out to the person who posted the photo if you have concerns about it. We always respect the privacy setting people select when posting a photo on Facebook (whether that’s friends, public or a custom audience), so you won’t receive a notification if you’re not in the audience. 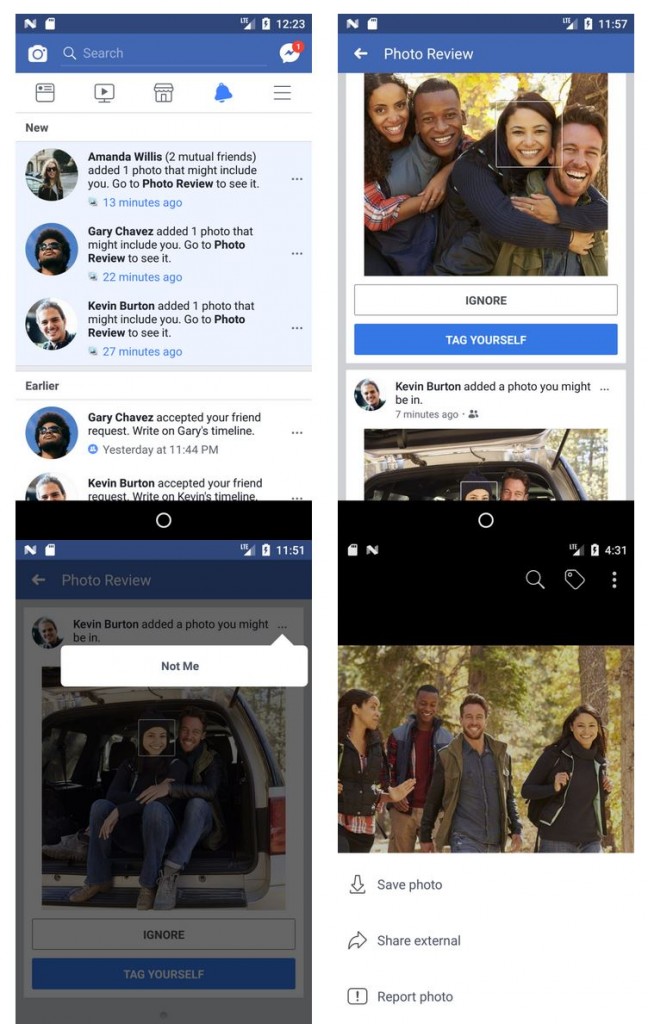 The way it works is pretty simple. If you’re in someone’s profile photo which cannot be set to private, you’ll always be notified. For pictures in albums and the News Feed, you will only get notified if you’re in the audience for that photo so as to protect the uploader’s privacy, and not alert you about pictures that are set to private. The new Photo Review section of the profile will keep track of all your untagged but recognized photos.

In the past, Tag Suggestions were seen as a privacy breach,  but the new Photo Review could be perceived as enhancing it, and might get a pass from global regulators. Whether it’s an unauthorized photo of you that you want to remove from Facebook, or an embarrassing image you don’t want to be tagged in but want to monitor comments on, or someone simply stealing your identity and trying to pretend to be you, Facebook will now have your back. The new Photo Review gives people more control over how their likeness is used, and will improve the overall Facebook experience.